The Heart of Prajna Paramita Sutra 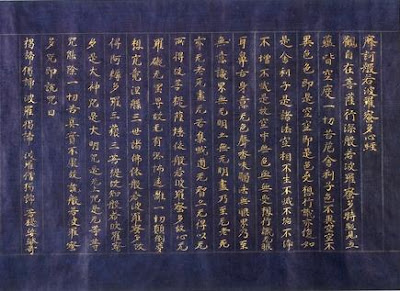 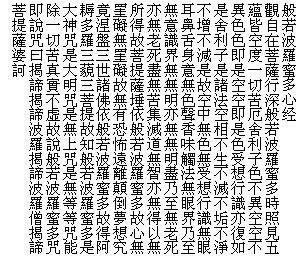 When Avalokiteshvara Bodhisattva was practicing the profound prajna paramita, he illuminated the five skandhas and saw that they are all empty, and he crossed beyond all suffering and difficulty.

Shariputra, all dharmas are empty of characteristics. They are not produced. Not destroyed, not defiled, not pure, and they neither increase nor diminish. Therefore, in emptiness there is no form, feeling, cognition, formation, or consciousness; no eyes, ears, nose, tongue, body, or mind; no sights, sounds, smells, tastes, objects of touch, or dharmas; no field of the eyes, up to and including no field of mind-consciousness; and no ignorance or ending of ignorance, up to and including no old age and death or ending of old age and death. There is no suffering, no accumulating, no extinction, no way, and no understanding and no attaining.

Because nothing is attained, the Bodhisattva, through reliance on prajna paramita, is unimpeded in his mind. Because there is no impediment, he is not afraid, and he leaves distorted dream-thinking far behind. Ultimately Nirvana!

All Buddhas of the three periods of time attain Anuttarasamyaksambodhi through reliance on prajna paramita. Therefore, know that prajna paramita is a great spiritual mantra, a great bright mantra, a supreme mantra, an unequalled mantra. It can remove all suffering; it is genuine and not false. That is why the mantra of prajna paramita was spoken. Recite it like this:

-- Translated by Tang Dharma Master of the Tripitaka Hsüan-Tsang on imperial command.

Popular posts from this blog

June 24, 2006
Suddenly one special looking sandals get popular. The brand is Crocs. It even opens a brand store at Marina Square. The design idea is from Dutch wooden shoes, I guess. A pair of Crocs sandals is sold at around SGD 50. The price is justified for what it is made of - Croslite. Based on Crocs website, "Croslite™, a proprietary Closed Cell Resin (PCCR) which is NOT plastic NOR rubber. Croslite™ is closed-cell in nature and anti-microbial, which virtually eliminates odor. it is an extraordinary impact absorbing resin material developed for maximum cushioning. its closed cell properties resist odor, inhibits bacterial and fungal growth and are non toxic. this versatile material can be worn next to skin and be cleaned with just soap and water." However, it really looks like made of plastic or rubber, and the design is unique. Replica comes. they are sold at SGD 20, SGD 10, SGD 5 depending on quality.
Post a Comment
Read more

February 23, 2006
A couple days ago, a sex video clip about a female Chinese graduate student Wang Ting Ting (王婷婷) was posted on the internet. Just as it is about to cool down, another sex video clip pops. It is a sex clip of a Singapore Nanyang Polytechnic student . The video clip was stored on her cell phone. Someone stole it and posted the video clip on the Internet. This is a breaking news. It is even reported on major Singapore and Malaysia newspapers. Now we have so many cool gadgets. It is a breeze to shoot photos/videos, and share them on the internet. Everyone, even dog, is on the internet waiting for breaking news. Be careful when you do something secret or stupid. It may appear all over the world, live!
Post a Comment
Read more

August 16, 2006
Watch out this sign before you light the cigarette up. SGD 1000 fine! However, I wonder if someone had really paid so much for violation.
Post a Comment
Read more

July 16, 2006
Singapore is very realistic about this issue. Prostitution is legal. The famous red light zone is Geylang area. I heard Hong Kong officials are considering to legalize this business in HK also. Singaporeans are not allow to work as prostitute. Maybe also SPR. The prostitutes are mainly foreign workers from poor countries in SEA area, such as Indonesia, Thailand, India, Malaysia, not from China. They come under special 2-year working pass, and must pass the health exam, yes, to prevent STD such as HIV, AIDS and so on. The brothels are mixed with normal resident houses. The brothel's house number is red lighted. The price is ranged from SGD 50 to SGD 200. Illegal sex workers are also around, and in some massage clinics. A very recent fatal case and newly effective government policy make a special social group - Chinese accompanying mom for studying kids a hot media buzz again.
Post a Comment
Read more